The planetarium was made possible by the voluntary contributions of the many sponsors of the Flint College and Cultural Development. Important, too, was the work of the officers and members of the Flint Board of Education who together planned and developed the planetarium project.

With Mr. Longway breaking ground, construction of the planetarium began on April 9, 1957. Roughly fourteen months later, the building was completed at a cost of approximately $600,000. On June 26, 1958, the planetarium was formally dedicated and opened to the public for the first time. Regular planetarium shows commenced on June 29, 1958.

The Robert T. Longway Planetarium is one of the largest and best equipped in the country. Designed by the Detroit architectural firm of Smith, Hinchman and Grylls, the structure consists of steel-reinforced concrete, measures 88 feet in diameter and 40 feet in height. The inner dome, which houses the projector, is 60 feet in diameter. There were originally 292 seats.  The inner dome is constructed of thin strips of perforated aluminum attached to a geodesic dome super- structure and serves as the screen for the planetarium projector.

The planetarium was designed to catch the viewers’ eye both inside and out. The waterproof surface coating on the outer dome contained Carborundum chips which sparkled in the sunlight or when spotlights were fixed on the dome at night. The reflecting pool, which adjoined the planetarium, contained a dozen spray jets. Colored lights played on the sprays at night. By looking into the pool, one could see the dome and its reflection formed a complete sphere.

In the early 1960s, to alleviate water infiltration issues, the outer dome was recovered in the now familiar turquoise panels.  In the 2000’s the reflecting pond and fountains were removed due to severe degradation of the concrete structure and to make way for the expansion of the Flint Institute of Arts.

Inside the building between the bases of the two domes is a 10-foot wide circular corridor or “ambulatory.” The outer wall of the ambulatory is lined with two 55-foot murals of astronomical subjects. The murals are done in luminescent paint on black canvas and glow under ultra-violet lights to give the viewer the feeling of looking off into space. New versions of the Solar System and Constellation murals were completed in 2001 by Michael Carroll.  On the inside wall of the ambulatory, set in display cases were a series of three-dimensional models and photographs that illustrate astronomical principles and discoveries.

To most people, the “planetarium” means a room or building containing a projector for reproducing the skies and the meaning now has become accepted. Originally, however, the word referred only to the projection instrument itself. The projector in the Robert T. Longway Planetarium was a Spitz Model B, the first to go into operation in North America. Designed and built by the Spitz Laboratories of Yorklyn, Delaware, the dumbbell- shaped instrument was 11 ½ feet long and weighed slightly over half a ton. It was suspended from the dome by four steel aircraft cables and anchored to the floor by four similar cables. 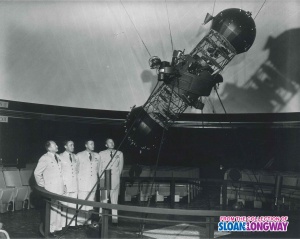 The Spitz Model B planetarium projector also contained many small auxiliary projectors designed to work together to reproduce the skies and the motions of the Sun, Moon, stars, the Earth and other planets and objects with reality and completeness as seen with the unaided eye. The Spitz Model B was capable of reproducing 3,083 stars in their proper relative brightness’s.

Among the 3,083 stars shown, the 54 of magnitude 2.0 and brighter were projected by individual lens systems; the rest are produced by tiny holes on the 36-inch star globes. The hole was only 0.0135 inch in diameter for a 5.8 magnitude star, the faintest shown. Realistic sharpness of the star images is achieved by using the concentrated brilliance of a zirconium-arc lamp.

The projector could simulate the astronomical phenomena of an entire day in as little as one minute, and it can run through a year in 12 seconds. Demonstrations could be given of solar and lunar eclipses, different forms of the aurora borealis, comets and meteor showers. Of particular value in teaching astronomy and navigation, were special projectors for sky co-ordinates.

A versatile sound system complemented the projection instrument in the presentation of planetarium shows. There were 16 speaker systems spaced around the planetarium chamber. With the speaker systems and dual turntables, the lecturer at the console could produce stereophonic sound or cause the sound to move in a circle around the chamber.

After assuming responsibility for the operation of Longway Planetarium, Dean Clyde E. Blocker of Flint Junior College, in keeping with the wish of the Board of Education and the Sponsors, constantly stressed the importance of the planetarium to the educational advancement of people of all ages within the community. Thus, the planetarium in addition to serving college science classes, also offered a regular schedule of public shows, held special programs for school children and made its facilities’ available to community groups. 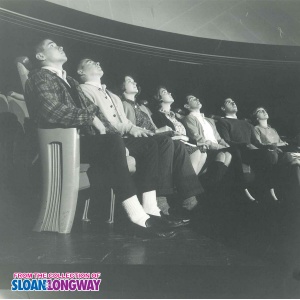 Over the many years of operation many upgrades and additions have been made to the planetarium theater. Additional projectors, special effects and a sophisticated automation system were added. Longway 1964 After 43 years, the Spitz Model B projector was retired and replaced with an Evans & Sutherland Digistar 2 projector. The Digistar 2 uses digital technology to create three-dimensional images ranging from star fields to molecules. New video projection systems and a new sound system completed the upgrade

In 2004, management of Sloan Museum and Longway Planetarium were combined. Longway Planetarium, named for Robert T. Longway, a community leader and one of the men responsible for the development of the Cultural Center, opened in 1958. It is the largest planetarium in Michigan with seating for 130 people. Classes on the solar system, general science as well as laser shows are offered to school groups and the general public.

On New Year’s Eve 2014, Longway Planetarium closed for a 6 month period to undergo extensive renovations. Everything except for a few of the walls and the classic black light gallery was removed and replaced before it reopened its doors to the public on May 30, 2015. During the closure, all of the old equipment was removed and efforts were made to sell or donate as much as possible to other planetaria. The old seats were removed and sold to local area establishments as well as the general public. The old interior dome was removed, a new concrete floor was poured, a new dome was constructed, and new carpeting and seating were installed.

Part of the renovation was, of course, new equipment. Longway Planetarium is now fitted with two Christie Boxer projectors. Combined, the projectors boast 4k resolution across the entire 16-meter dome with system brightness of 60,000 lumens. A new LED cove lighting system was also installed for special effect lighting. A 7.1 surround sound system was also installed to ensure the audio quality of the show matched the visuals.

In November 2021, Longway received an upgrade to its computer systems and upgraded its planetarium projection system to Digistar 7. It remains Michigan’s largest and most technologically advanced planetarium facility.

Your ticket for the: History of Longway Planetarium