Regional history, historic automobiles and hands-on science are major features of the Sloan Museum. Dramatic settings, video programs and hundreds of artifacts and photographs portray the area’s tumultuous 20th century history in the Flint and the American Dream exhibit. Traveling exhibits fill the Temporary Gallery with a variety of educational and entertaining displays year-round. The Buick Automotive Gallery presents major automotive exhibits featuring vehicles from the Sloan fleet of over 100 Flint-built carriages and automobiles. 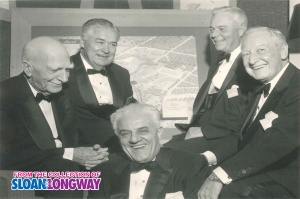 In 1952, the greater Flint community began planning for a College and Cultural Center. Funds were secured to build seven independent cultural facilities in a park-like setting east of downtown Flint.

Two museums were planned for the new Cultural Center – a transportation museum and a local history museum. Due to the prohibitive costs of separate museums, campaign leaders decided to combine the two themes in a single facility. The Genesee County Historical Society donated its collections to the new museum, named for longtime President and Chairman of the Board of General Motors, Alfred P. Sloan, Jr. The Sloan Museum first opened to the public on November 2, 1966. 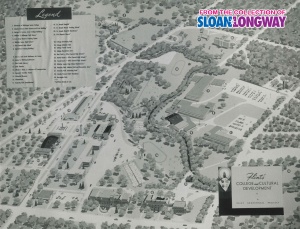 In the 1950s, the ad hoc College and Cultural Development Committee designated the Flint Board of Education as the governing authority, and endowment administrator, of the Cultural Center, including Sloan Museum. Today, the Flint Cultural Center includes Sloan Museum, Buick Automotive Gallery, Longway Planetarium, Flint Institute of Arts, Flint Youth Theatre, The Whiting, Sarvis Conference Center, Flint Public Library, and the Flint Institute of Music. While some of these agencies operated under independent boards, the Flint Board of Education remained the governing body for Sloan Museum, Sarvis Center, Longway Planetarium, The Whiting, Flint Youth Theatre, and Flint Public Library until December 15, 1993. At a Board of Education meeting on that date, the Board approved a Lease-Management agreement, which transferred administration of the Cultural Center agencies to the recently formed Flint Cultural Center Corporation. Today, the FCCC oversees Sloan Museum, Longway Planetarium, and The Whiting.

In 1999, the Buick Gallery and Research Center was opened. This facility, attached to the museum’s collection storage building, is one block east of the museum. The gallery is home to a rotating display of two dozen of the museum’s automobiles, a automotive restoration facility, and the Perry Archives. Since 2008, the name Buick Automotive Gallery has been used.

In 2004, management of Sloan Museum and Longway Planetarium was combined into Sloan*Longway. Sloan*Longway is comprised of three facilities, namely Buick Automotive Gallery, Longway Planetarium and Sloan Museum. Together, we serve more than sixty thousand school children annually, providing bench mark classes in science and history. We also serve another forty thousand walk-in public visitors who come to see history, exhibits, planetarium shows, as well as our automobile collections. Sloan*Longway is fortunate to serve many volunteers and researchers looking for local, genealogical, and automotive history. We are proud to have the privilege of preserving, collecting, and presenting Genesee County's history.

Your ticket for the: History of Sloan Museum